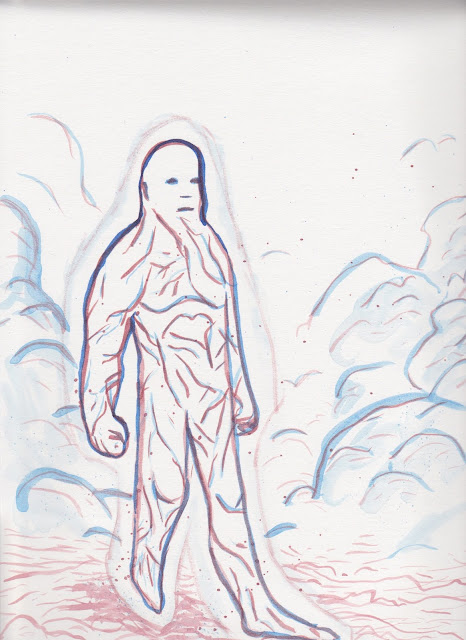 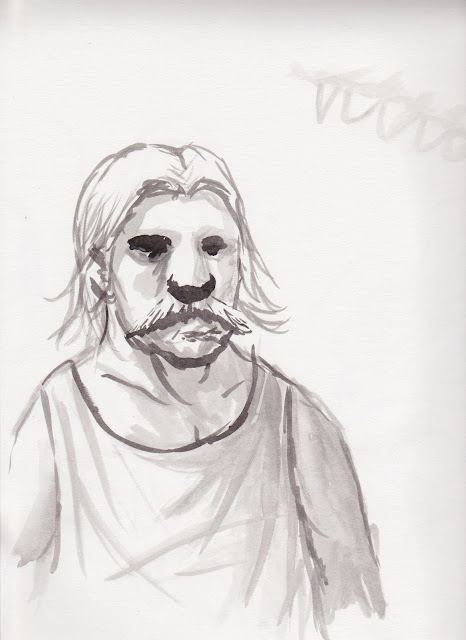 Justin Foley of The Austerity Program mentioned me and the shirt I did for them in their Village Voice interview. Baby!

"Tell me about the new anvil shirts. How did that idea come about?

We asked the folks at Hydra Head to pull together a shirt design for us. Four different people were kind enough to do something for us to consider. This by itself is very flattering. A bunch of our friends picked this as their favorite. It's hilarious and we take no credit for it at all. Thank Andrew Cox at Hydra Head and pay him money to design a shirt for your band."

This is almost as exciting as when I got my picture in the newspaper for lining up in costume for the Star Wars midnight screening (both times).

Also, I would like to thank James O'Mara for being good at adobe programs, because the shirt would have looked way stupid without his help.
Posted by Unknown at 4:46 PM No comments: 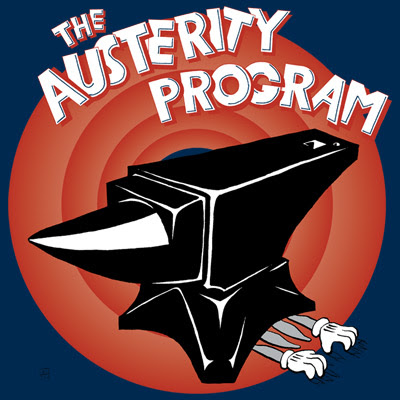 I designed a shirt for The Austerity Program, who's new EP Backsliders and Apostates Will Burn comes out in a few weeks. If you haven't given these fellas a listen, get on that. Their full length, Black Madonna, is easily one of the best releases from Hydra Head, and probably the most under-appreciated.
You can download a song from the new EP, "Song 26" at Brooklyn Vegan.

Get the shirt here, and other Austerity Program stuff here. 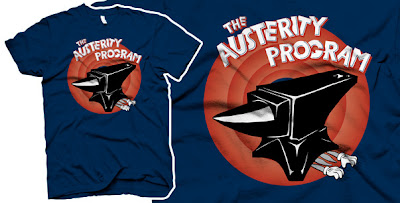 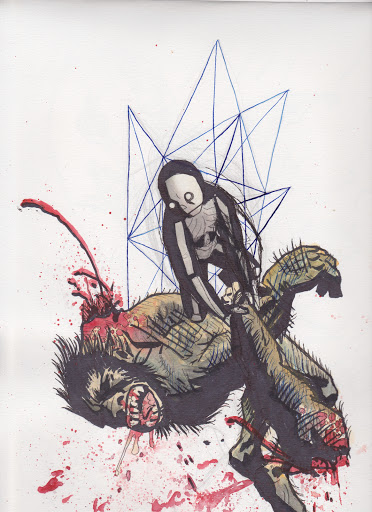 9"x12" ink and watercolor on paper

I wish I had only used a crow quill and brushes, without the uniball and sharpie. I like the splatter and geometry, though. And the bloody saliva.

Also, yesterday's post was an april fool's prank.
Posted by Unknown at 9:00 AM No comments:

UPDATE: THIS WAS AN APRIL FOOL'S JOKE

HOLY CRAP!!! LOOMIS IS GETTING HIS OWN CARTOON! AS IN EPISODES AIRED ON TELEVISION SHOW!

I put together a pitch with character descriptions and designs, rough story outlines, and a sample script and submitted it to a bunch of networks including Nickelodeon, Cartoon Network, MTV and Disney.
I JUST GOT AN EMAIL FROM CARTOON NETWORK SAYING THEY WANT TO DEVELOP IT TO AIR IN A TIME SLOT LEADING UP TO ADULT SWIM!
Episodes will probably be fifteen minutes long. We still have to iron out the details, but there is definitely going to be a pilot, and if it tests well online, it will be slotted on an actual tv schedule! I can't wait to get working on it!
HELLO WORLD, HIS NAME IS LOOMIS QCLOIXNEK LOOMIS, AND HE IS HERE TO TAKE OVER THE ENTERTAINMENT INDUSTRY!
Posted by Unknown at 11:03 AM No comments: